For every joy that passes, something beautiful remains.

Recently, I had the luxury of completing a whole novel at a go, and it was a really good one anyway, not one that I can put down so easily. It was not so much a novel as a true story of the author’s son. The book was His Bright Light: The Story of My Son, Nick Traina by Danielle Steel. Nick Traina was incredibly talented, both in music and writing. But music was the core of his soul. His passion. Yet it is devastating to find out that his passion also led to his death. It seems to me, inevitable as he also had manic depression, now known as bipolar disorder. From what I read it appears he had lots of depressive episodes which border on suicidal, and his lyrics for his songs were mostly dark and ominous. Eventually his suicidal tendencies translated from words to action, and he committed suicide on several occasions. 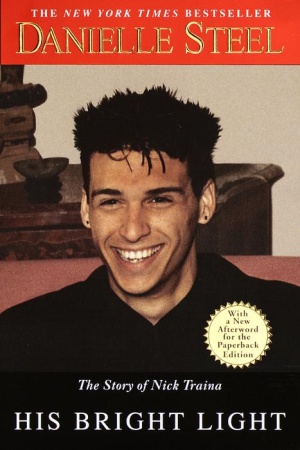 His family did everything they could to help him, and they did find a miracle drug in the end to deal with his crippling illness. Though to me it was a little too late, he was already a teenager by then, it took them that long. I don’t know if it was the technology back then or what, but for all the resources Danielle Steel had, it seemed like a hell of a crazy rollercoaster before her son was finally diagnosed correctly and eventually given the right medication. Also one thing which frustrated me was her insistence on respect for her son’s privacy. He was her son, for goodness sake, not just a partner. She knew he kept journals and refused to read them to find out what his struggles were. I cannot even begin to comprehend her. If she found out earlier what he wrote on his journals and showed them to the doctors back then, they might have gotten an insight to his illness earlier, in my opinion.

So anyway, with medication, his condition stabilised to the point where he was even able to form a band, and seemed to be doing very well till he started a tour for his band and realised that he was unable to cope with the stress. Eventually he left the tour prematurely, in the end affecting everyone else since he was the lead singer. So they disbanded. Even after forming a new band and things seemed to go well, he committed suicide again and finally succeeded. There was no suicidal note left for his family, and Danielle Steel couldn’t understand why he would do it.

I actually can relate to him a little. To me, at that point in time he must have been overly stressed by the fact that he couldn’t fail again. He had a band once, but failed. What if it happened again? So even though he appeared to be doing well on the surface, depression can lead him to brood on the negative rather than see things positively. I have actually fell into depression before, when I was in JC. Just like him, I couldn’t control myself, sometimes I didn’t even know why I would burst into tears in public. I was doing well in school, but I kept thinking negatively, kept thinking about the what ifs. What if I did badly for my A levels? What if I couldn’t get into any university? What would happen to me?

But somehow, with the support of my family, I pulled through. Luckily they found out early, since I was unable to control my tears. I remember just crying randomly and my mom asking me very worriedly what was wrong and I didn’t know. I didn’t know why I cried. Then again, my number of poems written at that period should have been an indicator. I do feel that Nick Traina and I are rather similar in this sense. Our creative juices flow madly when we are depressed. Quite sad, but true. Anyways, my family reacted fast and took me to the doctor, and I was prescribed pills as well, but it didn’t help for me at all. Eventually I was fortunate to find something else that helped. I joined the drama club. There was finally an outlet for me to channel my emotions to. And because it was so interactive, perhaps the positive energy from my peers rubbed off on me. When I was writing I only focused on myself and my dark, troubled feelings. So the negative energy enveloped itself around me. But being in the company of like-minded people in the arts fed me positive strength and eased my stress. I was no longer alone, unlike Nick. It is terribly lonely to feel like you are all alone in a crowd.

Demons kick their way into my head, spinning and laughing. Senses are dead. I cringe at their timing. They giggle and pinch me, their evil nails digging into my flesh. I twist away, retching, coughing up vomit colored blood, dying. Hanging up here on this hook is no easy task, so here I swing, being tortured, swallowed up by the great escape. I see no other background besides the green steel wall, leering above the piles of destruction left by my tormentors…

My depressing poem (Pardon me for it is quite long):

My mind’s a whirl

I want to shut

Don’t let them by

I alone can flaunt

I see Your shear

I see my own cross.

My heart is shattering

I can hear it break

My hands are fluttering

For help that no one gave.